Bonilla is a British brand based in Yorkshire which is owned and run by Graham and his daughters Natalie and Alex. The whole family share a passion for vanilla and its amazing taste. Since 2011 the family have supplied professional bakers and chefs with their award-winning Madagascan vanilla extracts and vanilla bean pastes made with sustainably grown bourbon vanilla beans to deliver the very best flavour in every bake. 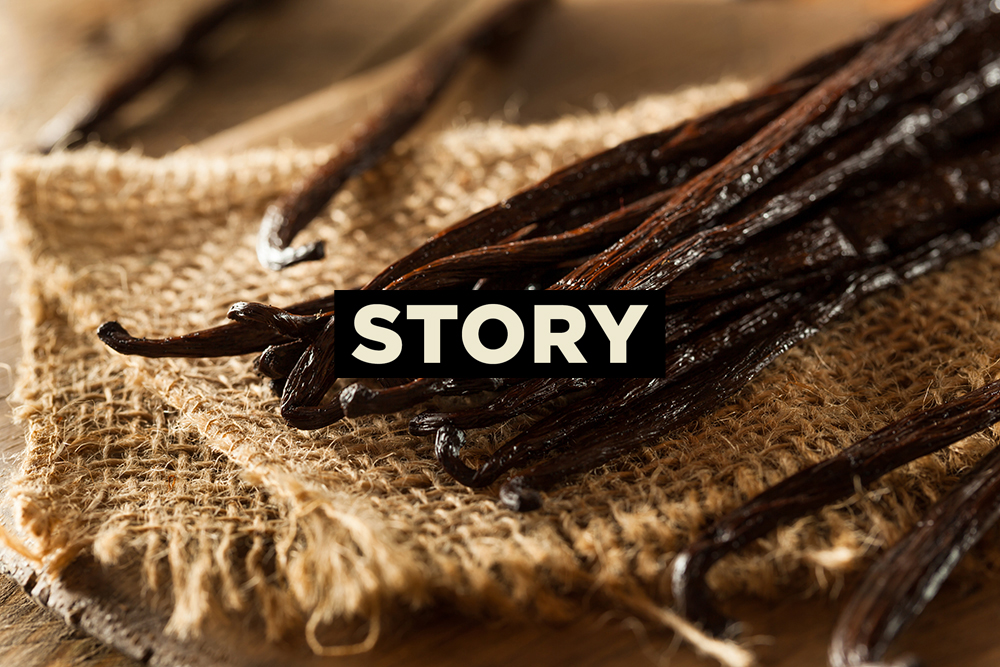 The Bonilla brand was born out of our passion for good vanilla, the real deal not cheap essence or low strength extract. Bon (meaning good in France where they know quite a bit about desserts and patisserie) combined with our very favourite word gave us – Bonilla. A brand that brings the best professional vanilla products to the home baker.

Former chef Graham had always found it hard to source high quality vanilla products in the UK.  This was a big source of frustration and so in 2011 he decided to do something about it and started Vanillaetc – importing high quality vanilla to the UK where he manufactured his own products and began to supply the baking trade.

In 2018/19 Alexandra and Natalie joined the family business bringing fresh new ideas to the table. They saw an opportunity to bring their fantastic award winning products to the retail market making them accessible to the home bakers of Britain and so Bonilla was born.

Bonilla is a contemporary baking brand, relevant to today’s modern bakers whilst being trustworthy, reliable and consistent. It’s innovative and always pushing the boundaries in the quest for delivering great taste.

It’s a caring brand that is mindful of the world around us and always considers our impact on the environment. You’ll be happy to know, that all of our packaging is fully recyclable. 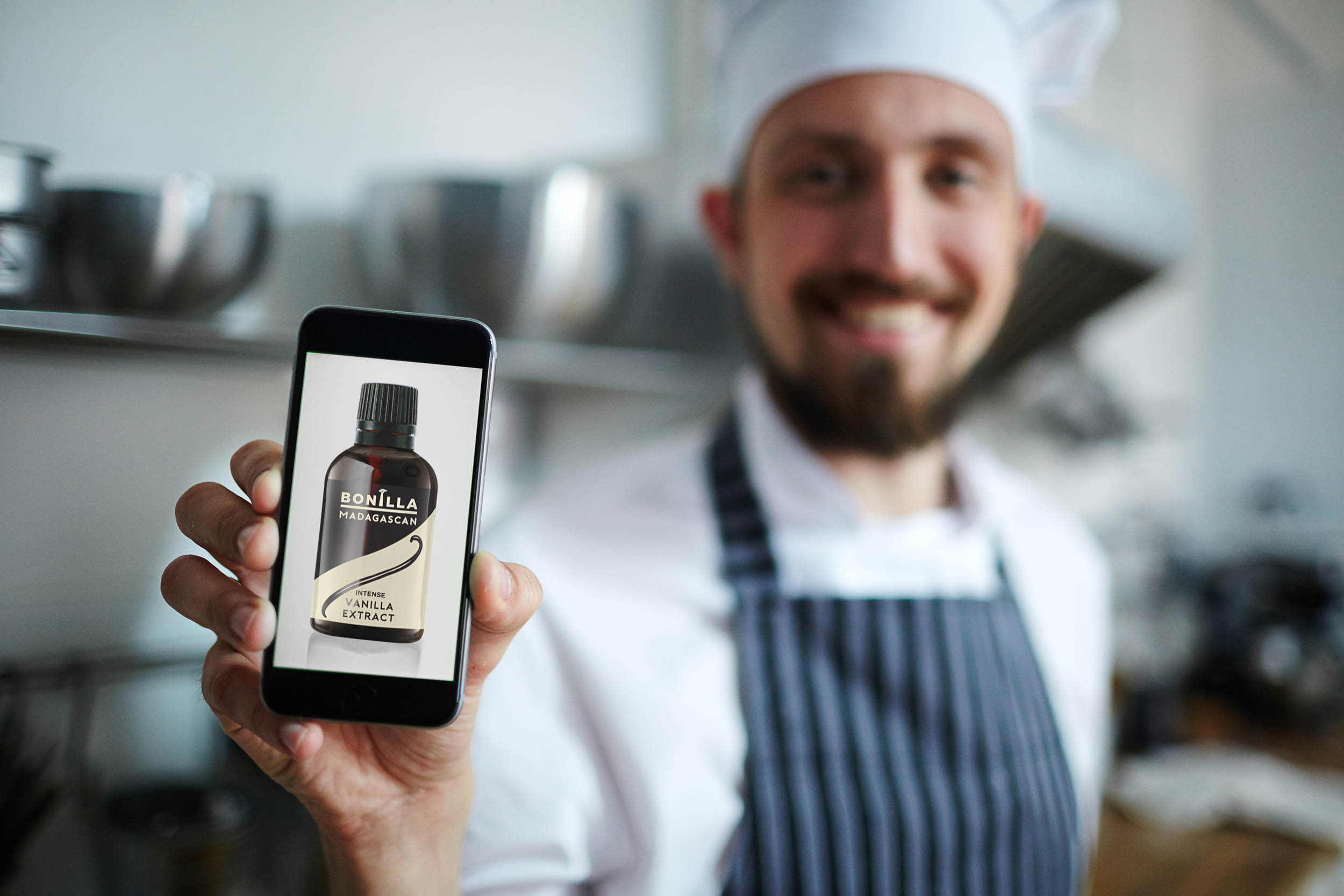 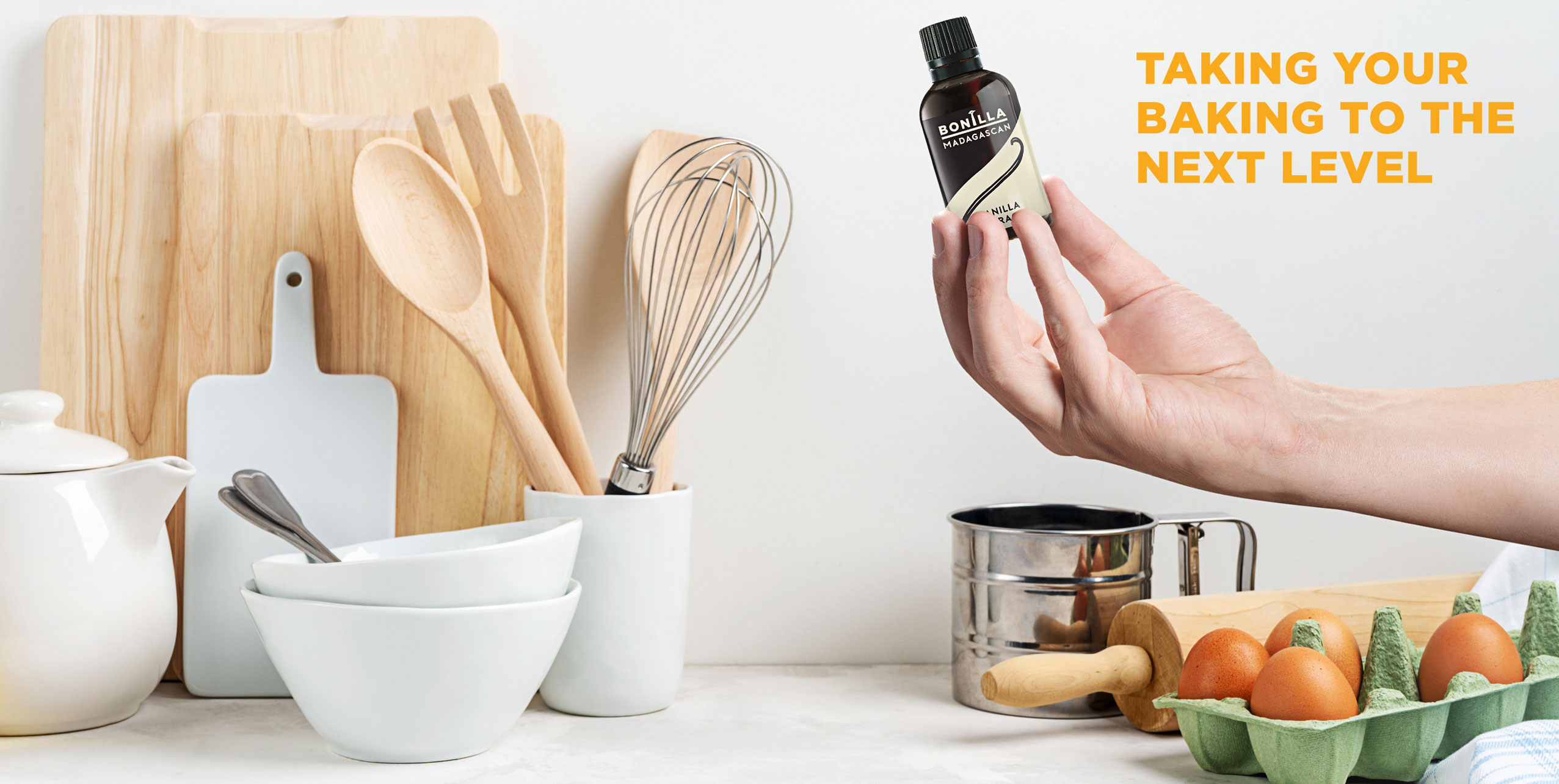 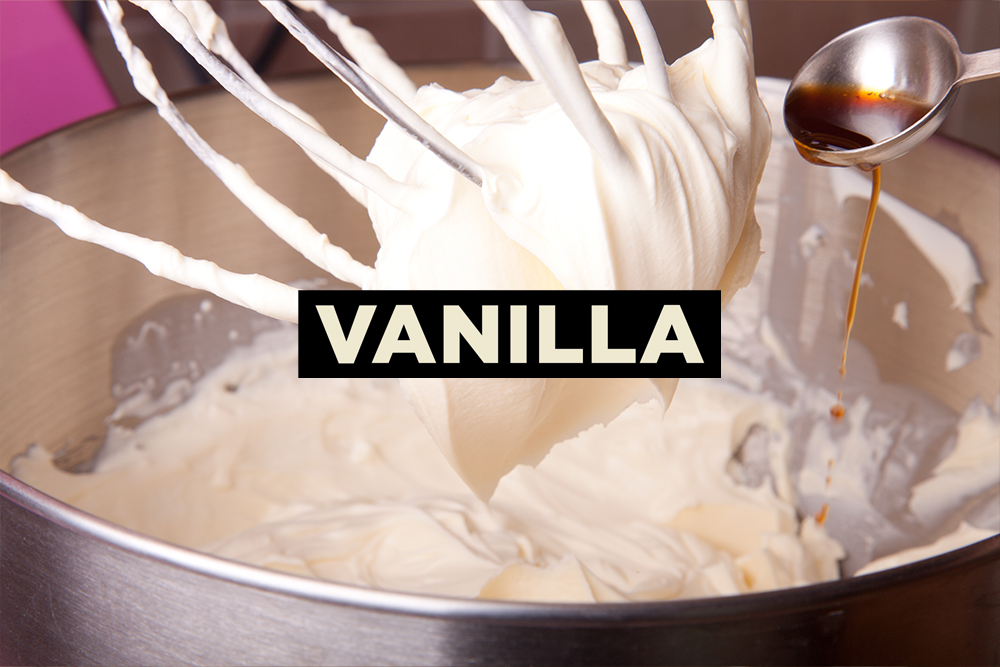 At Bonilla we are careful to source the best Bourbon beans from Madagascar to make our Vanilla extracts and paste. Vanilla extract is one of the most common forms of vanilla used today. It is versatile, easy to use and easy to store. But what makes Bonilla Vanilla different?

We love our products and are proud of them, but don’t just take our word for it! Read some of our reviews from our existing business to help you make your own mind up. https://uk.trustpilot.com/review/www.vanillaetc.com 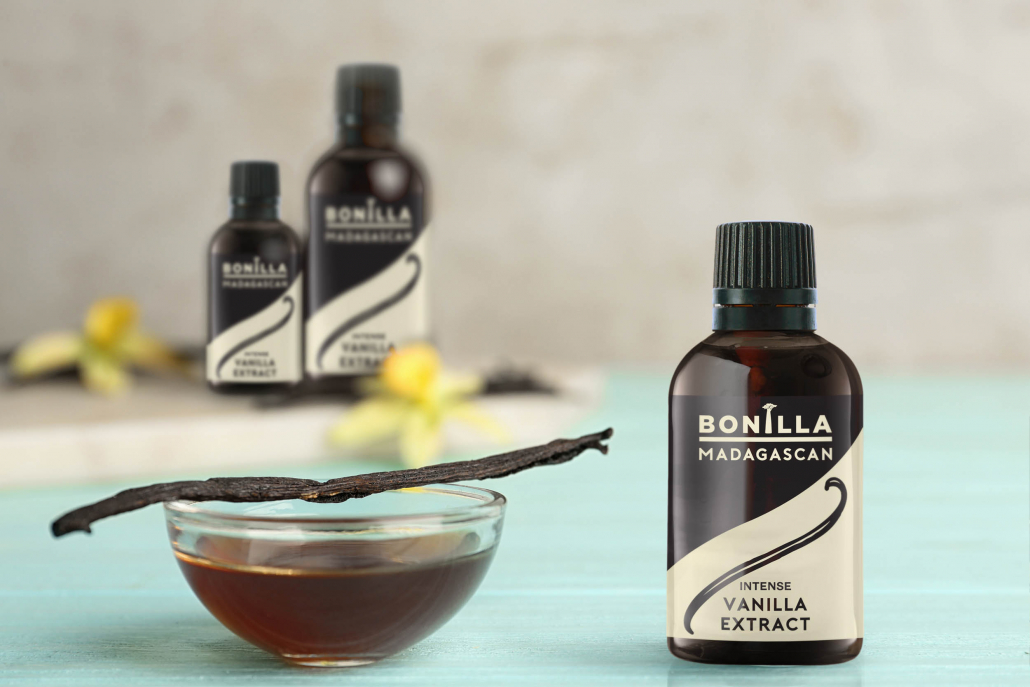 Vanilla is a popular flavour and key ingredient in many desserts, but with the variety of products available on the market, it can be hard to know which to choose for whatever recipe you’re making. Keep your eye out for imitation vanilla known as vanilla essence or flavouring, which is made from artificial flavourings, most of which come from wood by-products which can contain chemicals and can have a harsh quality with a slightly bitter aftertaste. Vanilla flavouring is usually a combination of imitation vanilla and pure vanilla extract. It’s cheap, but that may be the best that can be said for it.  At Bonilla we never use anything except the best vanilla beans, assuring our customers of the very best flavour in every bake. 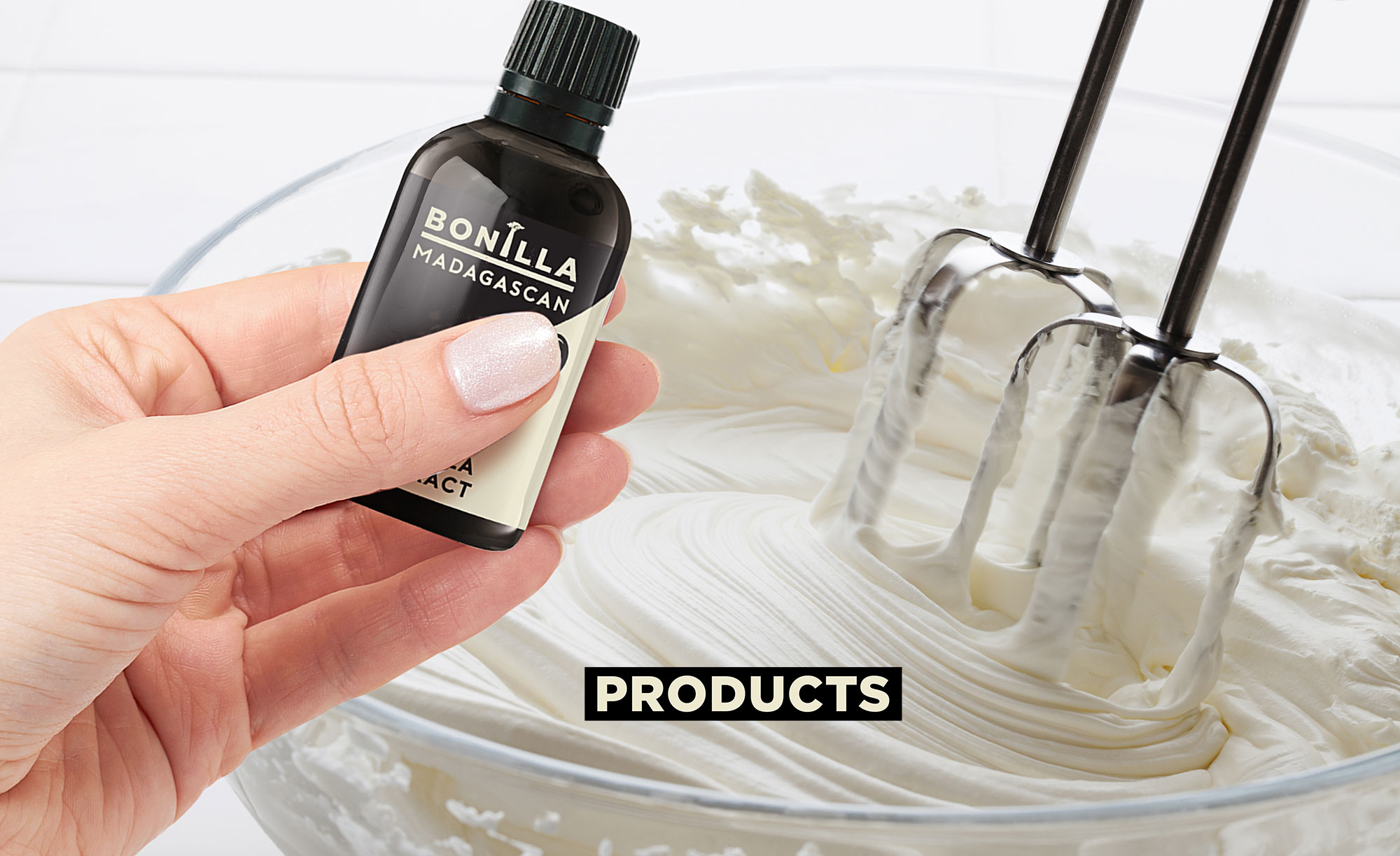 Our Vanilla Extracts use Madagascan Bourbon vanilla beans which we directly import from the Bourbon Island of Madagascar. We are proud to be able to produce our vanilla extracts in house and they have proven to be a winner with the 1 Fold Extract winning the coveted Great Taste Award in 2020. Our Bonilla brand showcases two types of extract: 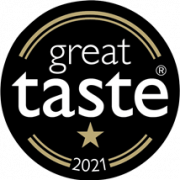 Vanilla extract can be used to impart a heavenly vanilla flavour to your favourite treats such as Crème Brulée, Crème Anglaise (Custard), Vanilla Panna Cotta, and cheesecake to name a few.

Vanilla Bean paste can be used in any recipe that calls for vanilla but is best suited to low liquid recipes where you don’t want to affect the consistency of your mixture and with high fat content ingredients. 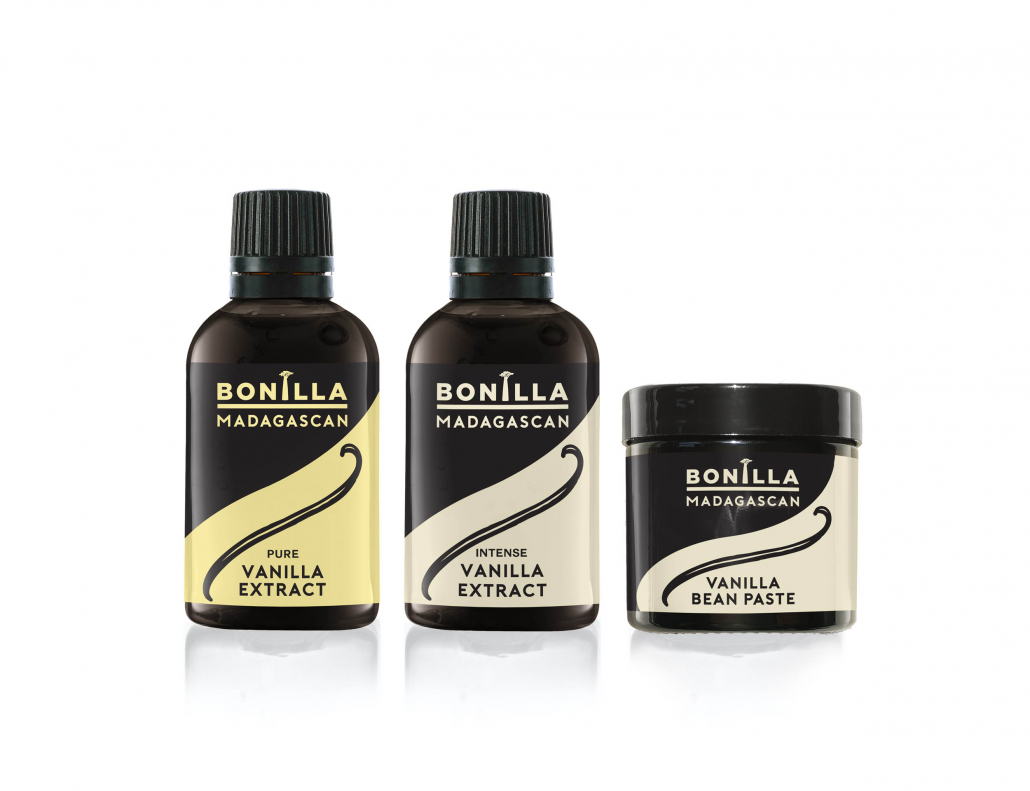 The combination of ensuring we use the very best ingredients coupled with the love for what we do and that we care about our customers, can leave you feeling confident that you will always receive the very best from us.

All our products are 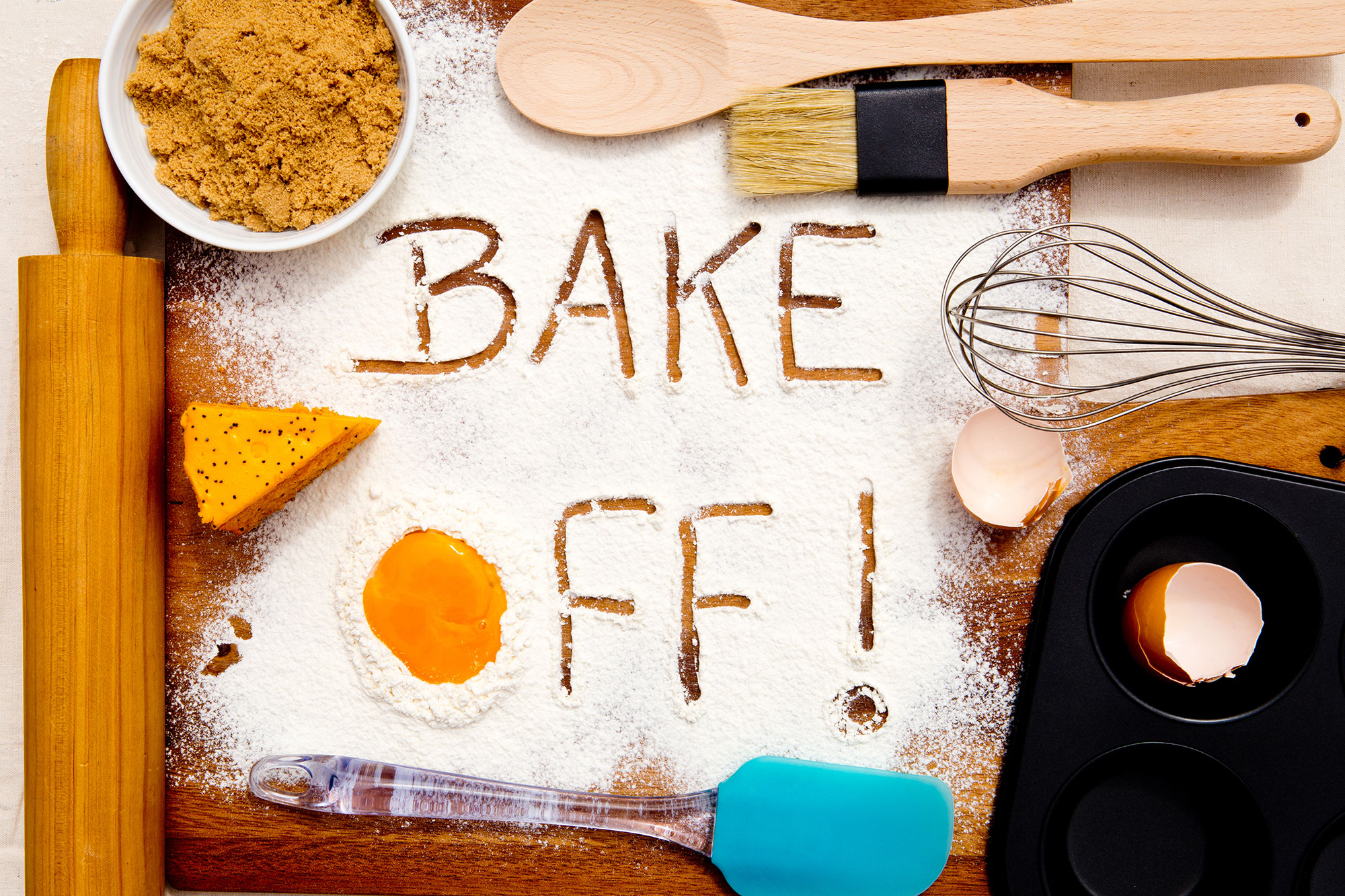 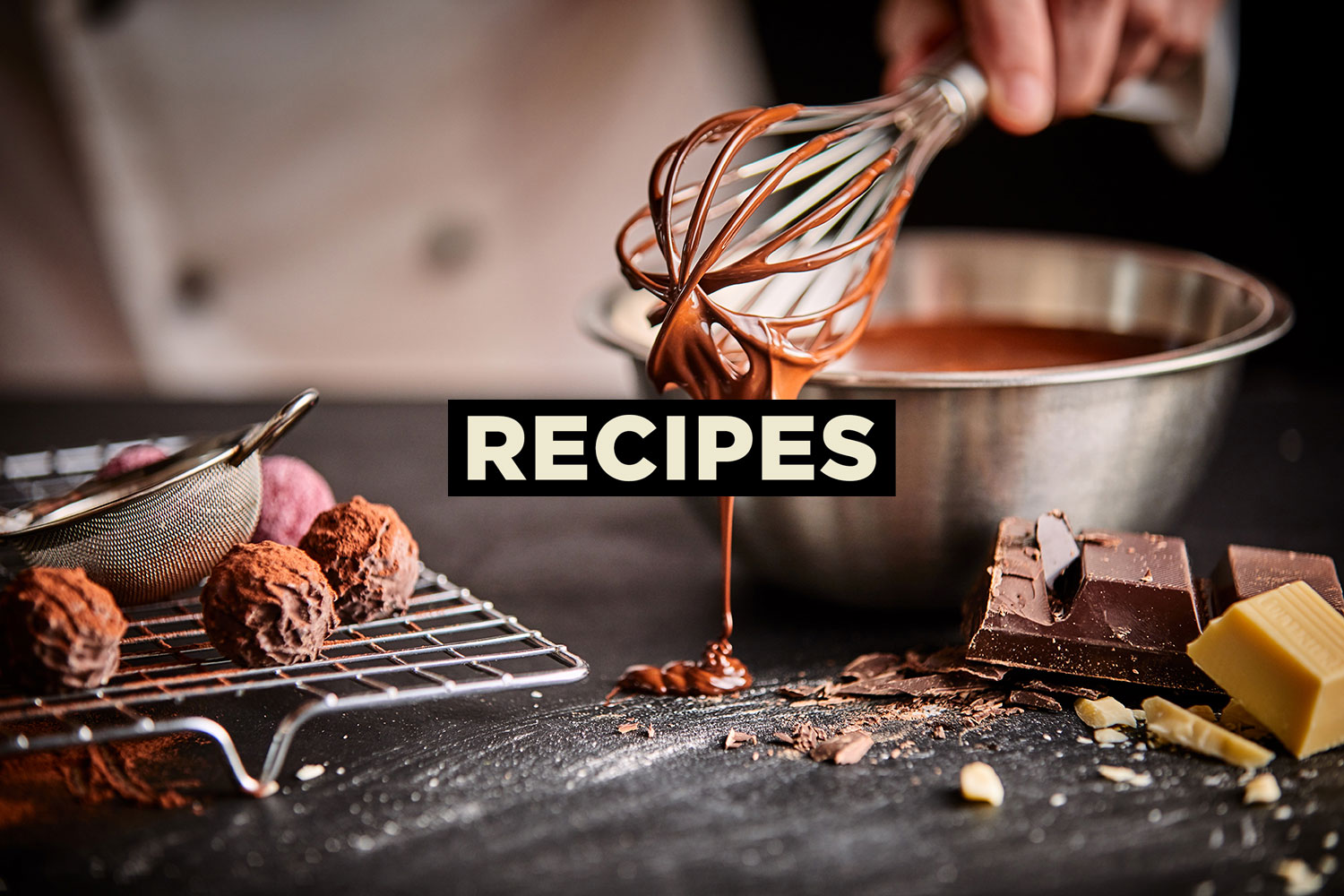 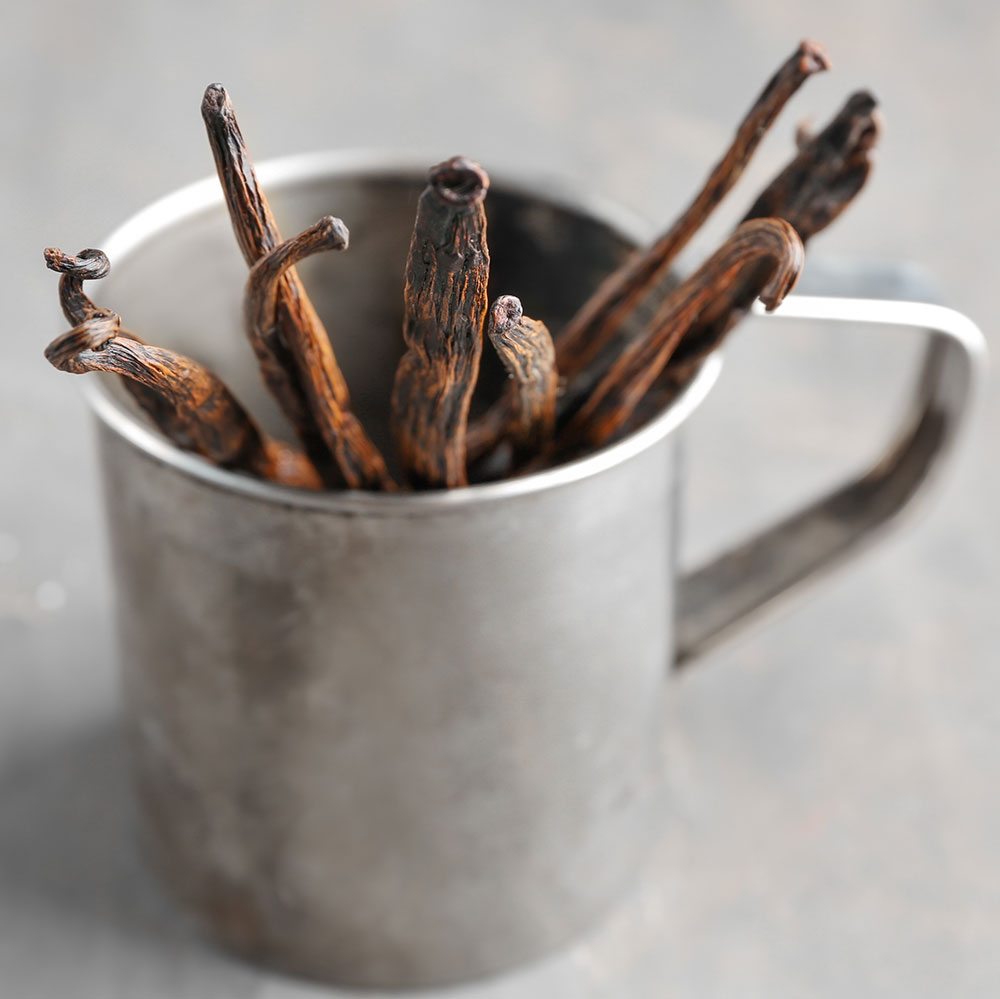 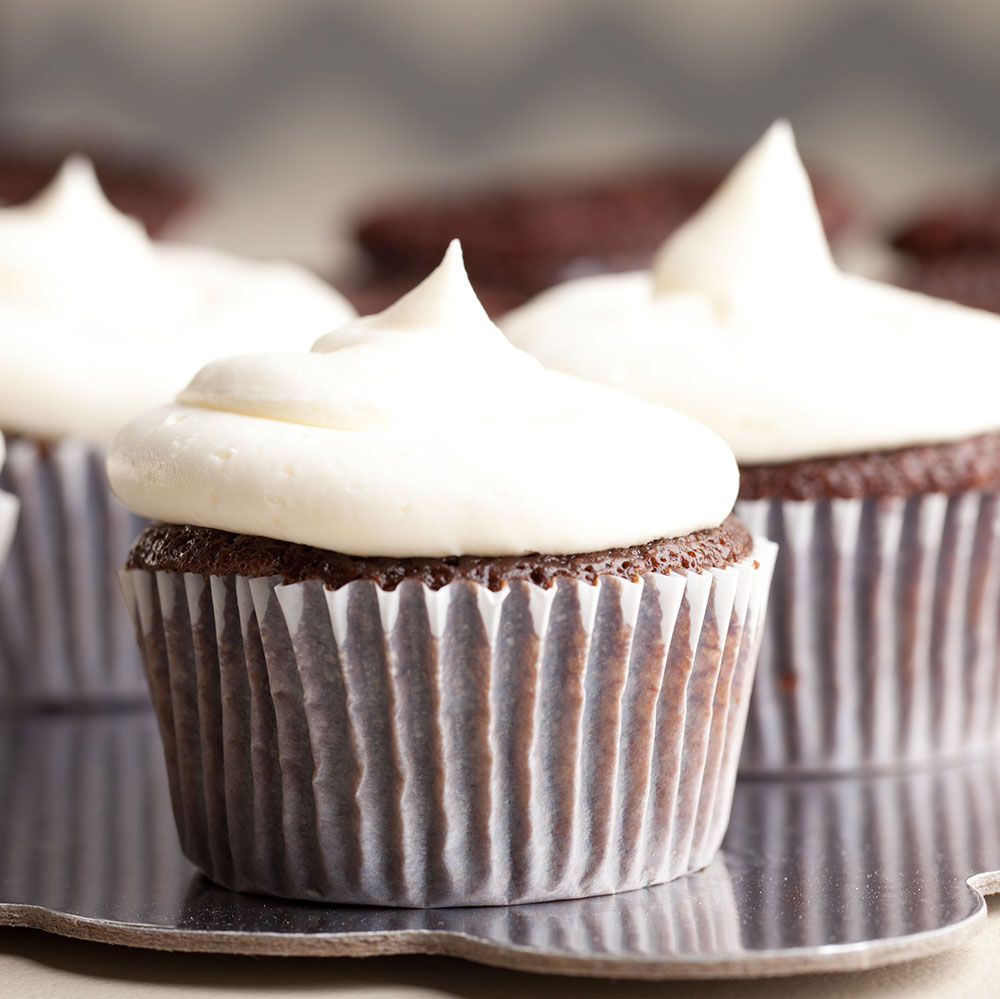 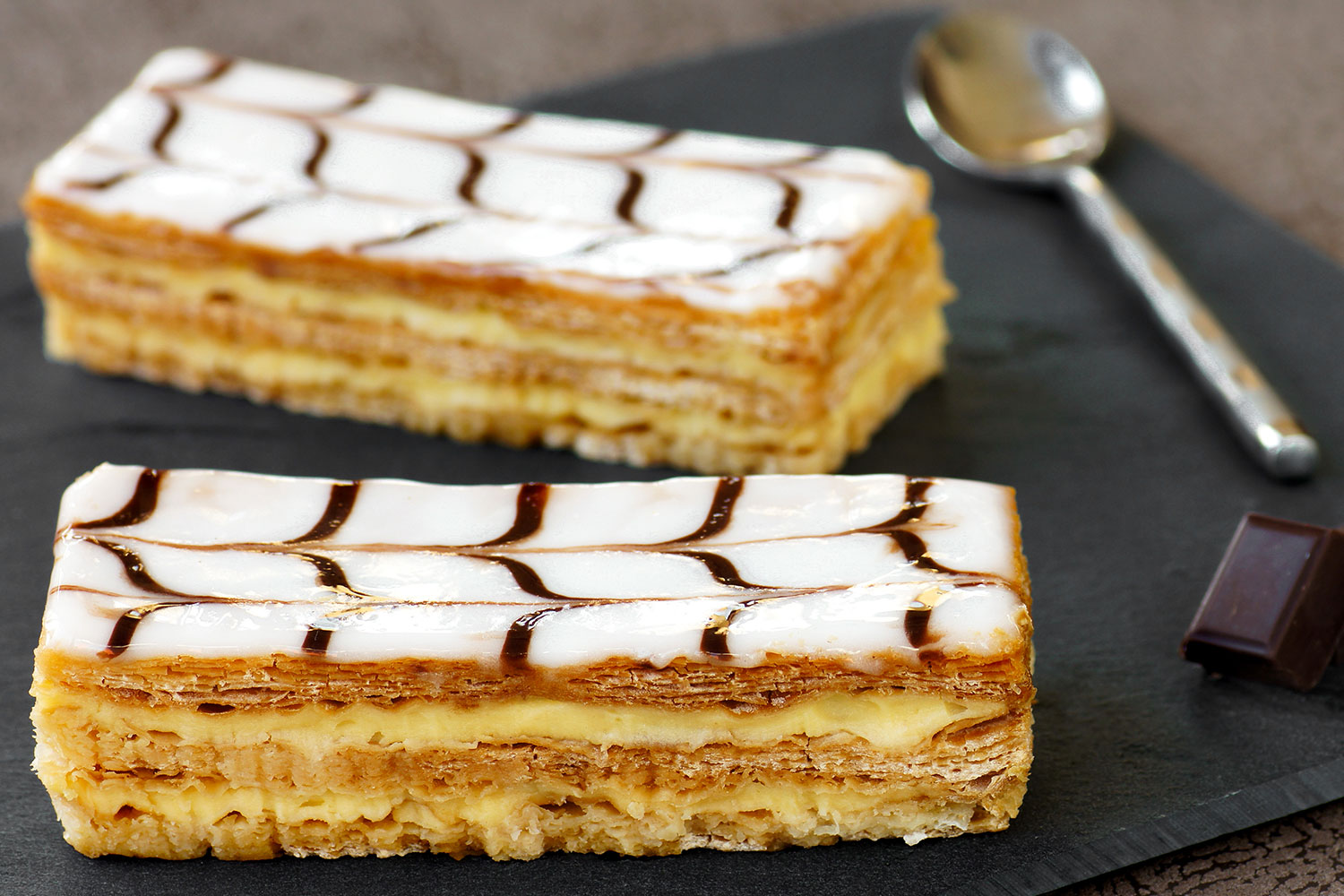 Vanilla is one of the world’s oldest and most popular flavours, conjuring up feelings of indulgence, nostalgia and familiarity in many types of baking, from pastries and desserts to cake and biscuits. While ‘plain vanilla’ has become a widely used phrase to describe the simplest version of something, vanilla is anything but plain.

Madagascar produces around 80% of the world’s vanilla and its beans are sweet, creamy and complex. It has the most recognised vanilla profile which is the most widely used globally. It is often used to flavour baked goods, ice cream or any products demanding that traditional nostalgic vanilla flavour. We are probably a bit biased at Bonilla as we are Vanilla mad but why not try out some of our recipes and you’ll see for yourself.